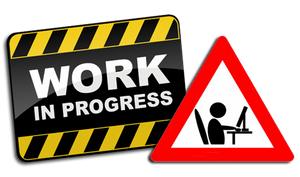 The story behind the Patterns 13, 14 and 17 begins after the second Boer War 1899-1902.  The Boers and the British Army were armed with a mixture of rifles, the Boers mainly with 7mm Mauser 1895/6/7 rifles and carbines and the British infantry with originally .303 Lee-Metfords which were then replaced during the war with the .303 Lee–Enfield.  This was due to the cordite used in the .303 ammunition being highly corrosive to the Metford form of rifling.

After the war it was felt by the British War Office that the 7mm Mauser was a far superior rifle for the needs of the British Army than the .303 Lee-Enfield currently in use, and so trials were begun in 1909 to develop a new state-of-the-art rifle and cartridge of approximately 7mm in calibre. Six different cartridges were evaluated and the .276 Enfield was chosen. This was a very advanced, high velocity, rimless round firing a 165 grain bullet at 2800 feet per second giving approximately 2880 foot pounds of energy, which by comparison the current NATO 7.62x51 round with 165 grain bullet travelling at 2600 feet per second gives only 2477 foot pounds of energy.

The new rifle chambered for the .276 cartridge was submitted on the 3rd of April 1911 to the Small Arms Committee by Assistant Superintendent Carnegie and Chief Designer Reavill, who were employees at the Royal Small Arms Factory Enfield (RSAF).  In 1912, after a few modifications, 1000 rifles were initially ordered and then a further order for another 251 was placed making 1251 in total. These were to be made at the RSAF and were delivered in January 1913 for troop trials. The new rifle was called the ‘Pattern 13’ or P13.

The P13 was designed with the emphasis on the ability for rapid accurate, fire as this was a priority for the British Army during this period under the new guidelines set out in 1906 from the then Secretary of State for War, Richard Haldane. This doctrine was to serve the British Army well at the battle of Mons in 1914. The action was built on the Mauser design with a long claw extractor and was cock-on-closing; it had a five shot magazine that could be loaded with a stripper clip. The rearsight was mounted on a bridge between two protective wings above the rear of the bolt giving a much better sight radius. The sight itself was very advanced having an adjustable flip-up rearsight, with a battle sight when folded down; as later used on Lee-Enfield number 4’s and 5’s this allowed rapid and accurate sight acquisition (see photo). The Mauser-type bolt had a low profile handle that was swept back to bring it close to the user's hand, hence its distinctive 'dog-leg' shape. The action was strong and the barrel was given a heavy profile. The stock was of one piece the same as the Mauser stock with four diagonal grooves on either side, the stock was also easier to produce than the two-piece Lee-Enfield. 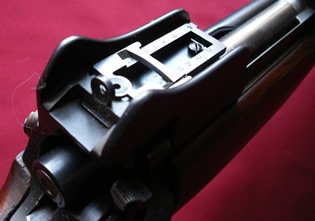 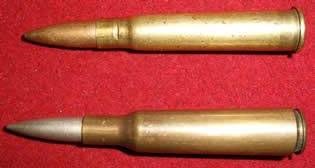 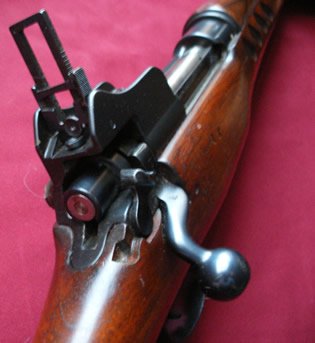 The trials didn’t go so well, there were complaints of heavy recoil and muzzle flash; it was also found that the new high velocity .276 cartridge caused a lot of metal-fouling and corrosion due to the heat of the propellant and the high velocity of the bullet. The trials were stopped after a rifle burst until further development could be made with the ammunition.

Then came 1914 and the First World War. The start of a major conflict is not a good time to change a service cartridge, the rifle itself was good, all that was needed was to change the calibre to the then current .303 MKVII service round. Modifications were made to the bolt and sights to accept the .303 rimmed cartridge.

Vickers at the time was heavily committed to machine gun production and as the war continued demand for them became ever greater. It was decided to give the contract to three American producers first to Remington Arms Company then to both Winchester and Eddystone.

TO BE CONTINUED WITH MORE TEXT AND PHOTOS….