The service revolver was a series of six models; it was designed so that parts could be as interchangeable as possible to simplify repair and maintenance, even between different models. Being a powerful top break revolver it needed to be safe and strong this was achieved partly by the hammer hitting the stirrup latch before the pin hit the cartridge and either forced the latch closed or opened the gun either way the gun could not be fired without it being in a safe condition, this system was already in use on the WG revolvers. The lock was simplified using only five main components instead of nine to twelve as used in other revolvers. The less components there were on the gun the less could go wrong, it was easier to maintain and cheaper to produce. It also saw the introduction of a special pawl to stop the rebounding hammer being knocked forward and discharged accidentally. Holster guides were added to stop snagging on the holster. Another problem with top break self extracting revolvers was gas and powder fouling getting into the cylinder axis pin. This was eliminated on the service revolvers by a collar at the rear of the axis pin and a nut sealing it. It also rotated on a hollow tube axis making it almost frictionless and therefore very smooth, see photo. 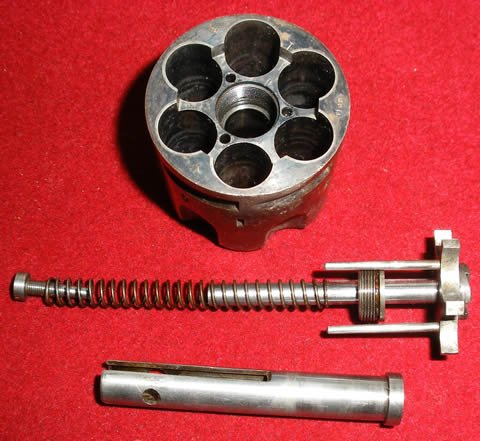 After stiff competition and many trials, mainly between Smith & Wesson and Webley, the new service revolver was adopted. The Webley Mark I was introduced by the British Government on the 18th July 1887 to replace the unpopular .455/.476 1880 Enfield revolver sometimes referred to as the Owen Jones model.  An initial order of 10,000 was placed by the War office at 61 shillings each (€3.66)

The * stamped after the Mark number was used to show it was only a minor modification to an existing model as opposed to a major model change. There are serial number overlaps due to the serial numbers running from the Mark I to the Mark II and then starting again with the Mark III and continuing until the Mark VI. Sometimes both models were produced at the same time as the old phased out and the new in.

Approximately 40,000 Mark I's were produced until the model was discontinued in 1894, the highest known serial number being 41349.  It was chambered for the black powder .455 Mark I Government cartridge.  There were 35,000 made for military contract and were military proofed.  Examples stamped with an N on the top of the grip behind the hammer and usually with a large crow’s foot on the top strap indicated issue to the Royal Navy.

There were 5000 made for the civilian market retailed by the Army & Navy Co-operative stores, London at the price of 105 shillings (€6.30) and the price reduced in 1892 to 97 shillings (€5.80) It was also offered nickel plated for an extra 6 shillings.  The civilian model would also accept the .450 Mark I cartridge and in 1894 could also be purchased in .476 calibre.  The top of the barrel was marked P. WEBLEY AND SONS and had commercial British Proof marks.

This was a modification of the Mark I.  One of the problems with the Mark I was that the firing pin hole tended to burn out so the frame was modified to accept a replaceable hardened recoil shield instead of being part of the frame, this continued on all further models.

This was a modification done to old stocks of Mark I’s and II’s after 27th April 1915 for the Royal Navy.  This involved fitting a 4 inch Mark IV barrel, a Mark V cylinder plus the new type cylinder cam and lever as used on the Mark IV onwards. This upgrade was done to old stocks during Wartime shortages to accommodate the extra power of the new cordite round. The left hand side of the frame was drilled and tapped to accept the cam. After the 5th June 1915 further changes were made with the addition of 6 inch Mark VI barrel with a removable blade foresight.

The Mark II was introduced in 1894 and approved for Government service on 21st May 1895.

The main changes were made following complaints that the hump (prawl) on the rear grip strap made it painful to shoot. It was removed and changed to make a continuous curve. This remained unchanged until the introduction of the Mark VI.   A new hammer was introduced with a shorter, thicker, straighter striker nose (firing pin) the cocking spur was also made wider after complaints were received from the Cavalry that they were having difficulty cocking the gun with gloves on.  The removable recoil shield was now standard. A few changes to the extractor lever assembly and minor changes to the trigger guard were also made.

The * was added when the hammer was changed to that of a Mark IV after October 1899. For the Mark II** see Mark I** as the same modifications were done to both Marks.

There were approximately 80,000 of this model produced.

The Mark III was introduced in October 1897 and approved for Government service on 27th November 1897. The most obvious visible difference from the previous models of the service revolver was the change to the way the cylinder was retained using a crossbar under the holster guide which engaged on a collar on the cylinder, effectively doubling the area of contact. A similar system was used on the 1891 Webley Government and in a revised form on later WG models. The cylinder arbour was now attached to the frame with a spiral groove cut into it to reduce fouling. 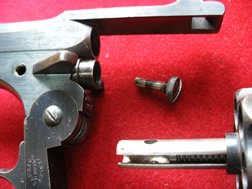 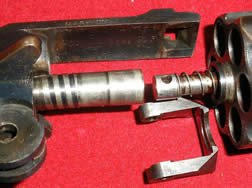 The extractor star was also changed to have only one locator pin, two flat sides were machined to the extractor rod to keep it in line (see photos for clarity). These changes were retained on all further marks of the service revolver. 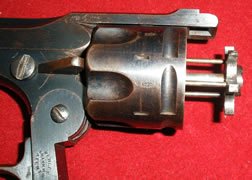 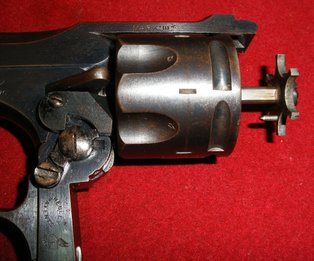 Some commercial models of the Mark III in calibre .455/.476 were produced with either a 4" or 6" barrel. Another option was to have a squared butt instead of the birds head grip, this was similar to an option on the WG models. A separate, reshaped frame casting was used to accommodate the flared grip.

Serial numbering did not continue on from the Mark II, the lowest observed number was 101 and the highest being number 80012.

There were some changes to the type of steel used ,the tip of the pawl was hardened and the ratchet teeth of the extractor were case hardened.

Lowest known serial number 77503 (overlap of the Mark III) and the highest serial number 130024. It is unknown how many Mark IV's were produced the British Government did not purchase any more after 1904 and the commercial sales had there serial numbers mixed with sales of the W.S Model.

A commercial 6" version with Metford rifling and an adjustable foresight was produced, this was available to Officers and Cadets from the Government at their own expense.

This was considered to be a very satisfactory revolver and officially remained in service for 14 years. This was still an issued weapon at the outbreak of WW1 and was later used during training and instruction by troops before going to front line positions.

The Mark V was introduced on the 9th December 1913 end approved for service on the 5th June 1914. As the Mark IV had been satisfactory, little change was made to this model except that the diameter of the cylinder was increased from 1.718" to 1.745" to cope with the new more powerful Mark II .455 nitro-cellulose round. The frame had to be enlarged accordingly. At the outbreak of World War I the Government ordered 20,000 Mark V revolvers on 19th September 1914 at a price of 59 shillings (€3.60) to be delivered at a rate of 500 per week. In May 1915 some were fitted with a 6" barrel with a removable foresight for land use only. A very few commercial Mark Vs calibre .450/.455 in the 135000 serial range were fitted with a 7.5" barrel.

The lowest observed serial number was 129926 and the highest was 214233, approximately 20,000 were produced with only a two year production run.

The Mark VI is by far the most well known Webley produced with about 280,000 being made during the First World War and approximately 300,000 produced in total between the years 1914 and 1939 including those being made in Enfield after 1921. The most obvious visual changes were the grips and 6" barrel. Other slight changes were made to the barrel catch but apart from that everything was pretty much interchangeable with the Mark V. Serial numbers used the same range as the Mark V starting at approximately number 135000 and the highest known being 455231. After the end of the War approximately 2000 commercial sales were made of the Mark VI and W.S Models mostly by removing any markings and refinishing old Military guns from the War, they were serial numbered in the 400000 range, this continued until 1939

The Mark VI had a lot in common with the W.S. New Army Model which was first produced in 1902 and the Webley Wilkinson 1905, 1910 and 1911 Models. There was a theory that the Mark VI was introduced in 1915 during Wartime production to make use of the machinery that had been set up for the manufacture of the W.S. Model which had previously seen little use.

As supplies of .455" ammunition became difficult to obtain, many Mark VI's had the rear of the cylinder shortened by approximately 0.060" to allow the use of .45acp in half moon clips as used with the Colt and Smith & Wesson Model 1917 revolvers.

There was a Bayonet made for the Mark VI from converted Gras bayonets by the Birmingham Gun Maker W.W. Greener to a design of Captain Arthur Pritchard. It was never officially adopted and very few were made. They would have seen very limited use.

A shoulder stock was produced for the 1.5" Webley flare pistol and although this could fit the Mark VI grip turning it into a carbine there is no evidence that this was ever done. It is believed that the myth was started by a Museum curator as a joke to trick some collectors.

The Enfield Mark VI was produced at the Royal Small Arms Factory, Enfield from 1921 until 1926. Visually they are identical except for the finish and are stamped Enfield above MK (crown) VI beneath was stamped the year of production. The grips were also 0.25" slimmer. It is unknown exactly how many Enfield Mark VI's were made but it is thought to be between 32,000 and 40,000. I would be grateful to anyone who has one of these revolvers to let me have the serial number to help confirm this.